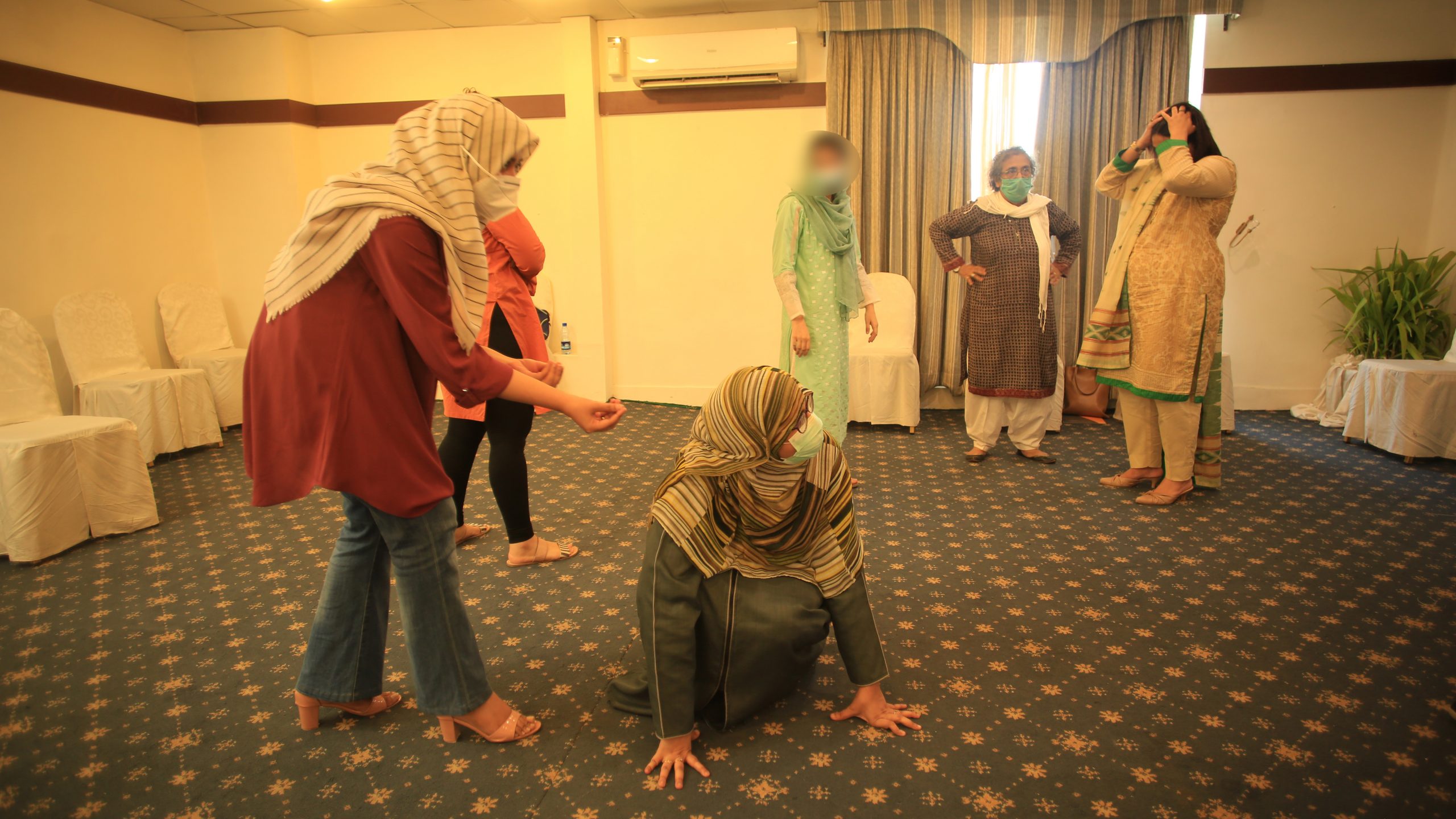 First Impressions as an Observer: Arts Workshops as part of PIECEs Research

Pakistan has a rich history of arts and drama, however, even in 2021 theatre as an art form has not been able to integrate into the mainstream entertainment circles. It has unfortunately either been associated with taboo ideas and behaviours, or is available to a few privileged groups in society. Knowing this, I felt extremely apprehensive about organising Theatre of the Oppressed workshops – a new concept within mental health – for healthcare providers, caregivers, and people with lived experience of psychosis.  Even if they agreed to be a part of the sessions, would they be able to leave behind their inhibitions and play with us while sharing their personal stories? 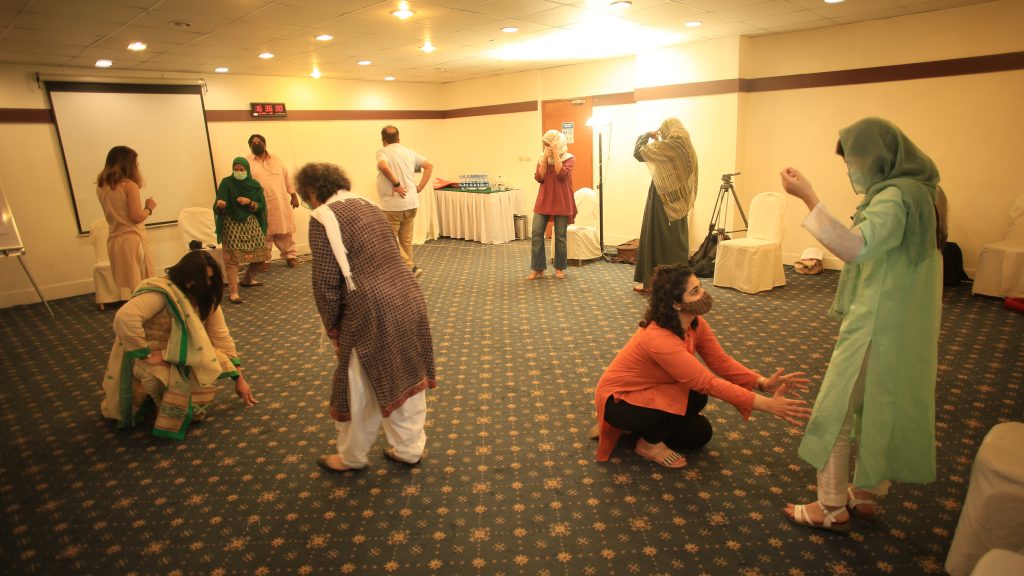 Healthcare workers during Theatre of the Oppressed Arts Workshops

Convincing our desired demographic to attend the workshops proved to be a long and gruelling process. People were unable to comprehend how games and exercises would help with furthering the understanding of the experience of psychosis in Pakistan. Thankfully, we were able to enrol a sufficient number of participants from each of the three groups, and kicked off the first set of workshops with psychiatrists and psychologists. Contrary to my expectations, the seemingly serious healthcare providers broke away from the confines of their professions, and took part in the games without reservations, sharing poignant stories and experiences from their clinical work. Led by our Arts partners from IRC (Interactive Resource Centre), some of the images created showed their struggle with burnout, lack of availability of support staff at hospitals, the importance of family counselling, and the great need for support groups for caregivers of people with psychosis. We received positive feedback from all the healthcare providers, who shared that they were usually so entrenched within their daily routines and structures that they were unable to view the experiences of patients and caregivers from the different perspective that Theatre of the Oppressed provided. 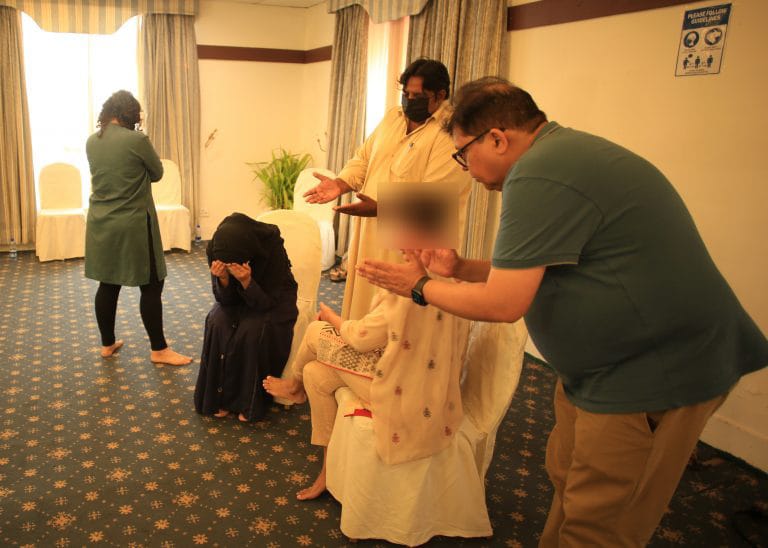 We decided to hold workshops with caregivers and people with psychosis together in the same room due to challenges around attendance. These individuals surprised me with how generous they were with their stories and challenges, and how brilliantly they communicated through the games and exercises. Initially, the caregivers exhibited some resistance; however, once they saw their family members and others with psychosis enthusiastically taking part in the activities, they decided to loosen up as well. Most participants with psychosis shared that they expected to feel better after these workshops, and that they wanted to learn something new. Most caregivers said they were there because of their family member, and wanted to learn how to better support them. By the end of the second day, the entire group came together and constructed powerfully evocative images of being restrained by their family members when experiencing active symptoms of psychosis, the challenge of seeking care at overburdened hospitals, the overwhelming responsibility and subsequent stress faced by caregivers, and the need  for increased empathy and understanding of the condition. 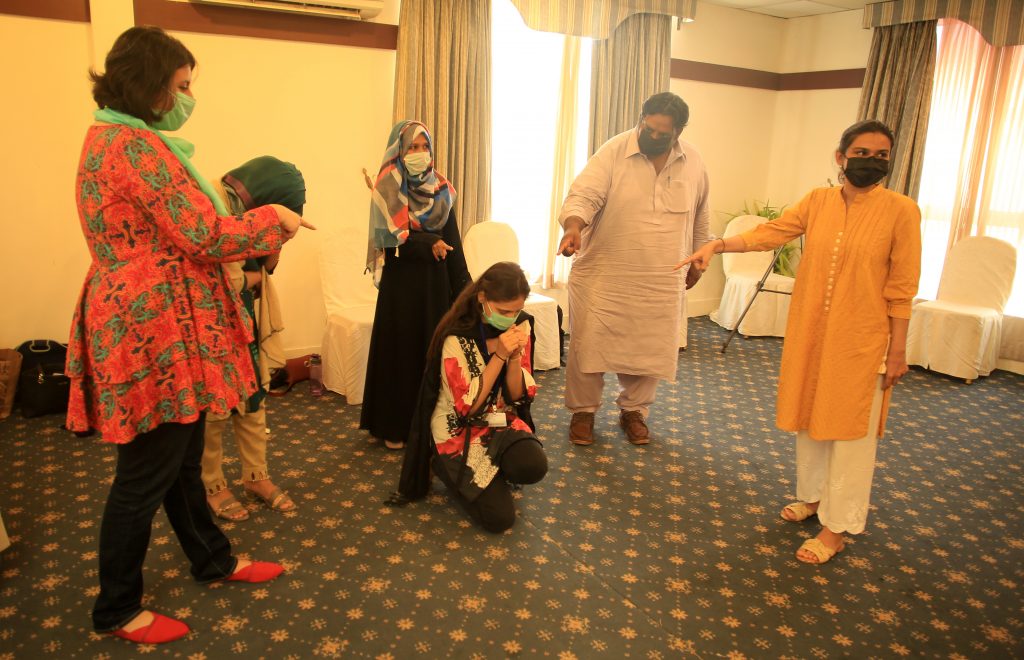 The stories and experiences that our participants shared have opened up a myriad of questions around the challenges faced by those living with psychosis, their family members, as well as the healthcare providers who work with them. We hope to work with these stakeholders to further develop these stories, and bring them to the wider community to raise awareness and increase acceptance and understanding of psychosis in Pakistan.

To finalise, read the impressions from Dr. Faiza Rehman, Psychiatrist at Jinnah Postgraduate Medical Centre (JPMC), regarding her participation on the Arts Workshops:

I registered for the workshop with a lot of curiosity, to be honest. It was almost serendipitous for me that art forms were being utilised in the management of mental health. Although this isn’t a new concept, it is now not only being implemented in Pakistan but is also within reach. It was a thoroughly refreshing experience and I will take the liberty to say that I was there partly to cater my own cravings for performing arts and being able to be of some help for others, in that process, was a double fold joy in itself. Although the moderating team and my fellow participants met each other for the first time, the bond that was formed between them and the experience gained was such a positive one – probably due to the goodness of intent and nobility of the cause that brought them together. The workshop helped us see the small details of patient care and even the perspectives of a caregiver that might get neglected in the routine hassle of managing the patient. With a lot of heartfelt wishes for the team managing this project I look forward to more such activities and would be eager to be a part of them in the future.